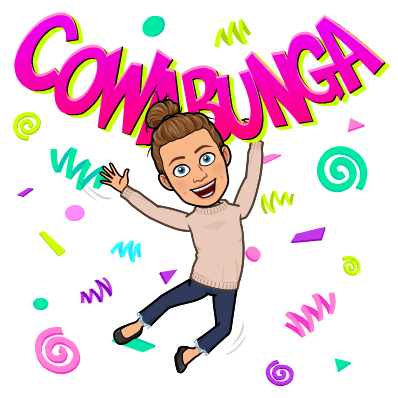 Woohoo, we’re about the cross the finish line! It has taken me 6 1/2 months but I’ve made it through all 23 Things! It has been a really enjoyable course, I’ve loved the bite-size aspect of it & have fulfilled my goal of gaining some new knowledge in the field of digital skills.

I particularly enjoyed the fun apps based ‘Things’ and also learning more about my digital footprint & security. I’ve certainly picked up little tips and info during the journey of this course which will improve my skills both at work and home. Before each ‘Thing’ I would take a look at the community blog to see how others found it & found this to be really useful, it’s good to know we’re all in it together 🙂 . The blog aspect of the course has been fun and good way to stay accountable while doing self-paced learning. In general I didn’t have any issues with any of the ‘Things’, some were more useful to me than others, but that’s to be expected. Overall 23 Things has been very enjoyable & I would encourage those about to embark on their 23 Things journey to dive in!

About a year ago I downloaded Snapchat for the first time, couldn’t really see how it would improve my life in any way & swiftly uninstalled it. I may have been a bit hasty though. For ‘Thing 22’ I reinstalled Snapchat (a pain free experience) & had a go with the various filters. It really was such a laugh, probably made even more so by the fact I was doing it in the office! 🙂 Many of my friends use Snapchat & one of my colleagues showed me the many photos & videos he has made of his daughter on Snapchat – very cute.

I haven’t attempted a video on Snapchat or tried Dubsmash yet, as mentioned previously I was doing this in the office (open plan) & I’m not sure how everyone would feel about me miming along to some cheesy music on a Wednesday morning. I now have both apps on my phone though so will try these out later.

As previously admitted in my 23 Things blog, I’m not much of a gamer, so I was a little apprehensive taking on Thing 21 – online games and learning. The most appealing subjects to me were the Nobel Prize Discovery Games and The National Museum of Scotland Games, I played two games on each site.

Firstly, Nobel Prize Discovery Games. Here I played ‘Peace Doves’, which did teach me a little about nuclear weapons and which countries still held weapons, including those who aren’t supposed to, so that was quite interesting. The game itself was slow though and had me wanting to give up about half way through. I then tried ‘The Blood Typing Game’ which was more fun but I found there wasn’t enough initial information to explain the game or help with how to work out a blood type, which resulted in a lot of guessing from me! Definitely not cut out to be a doctor then

Secondly I took a look at a couple of games on the National Museum of Scotland’s web page. I liked these games more, they we quick and easy to understand, though possibly not as informative as the Nobel Prize Discovery Games. I played ‘Which primate are you?’ which is basically just answering multiple choice questions. Apparently I am ‘Uncle Bobby, a grumpy gorilla’ – not sure how I feel about that! I then played ‘Build a Windfarm’ which took me back to my school days of studying geography. It was a really simple, but enjoyable, game which made you consider some of the basic factors when deciding where to place a windfarm.

I think there is definitely a place for games within the learning environment and they bring a different element to study. Everyone has their preferred learning method & I think the more options & the easier it is for people to learn the better!

For ‘Thing 20’, Professional Social Networks, LinkedIn was the most relevant to me as a non-academic & non-scientist. I have had a LinkedIn account for quite a few years now and have used it to varying degrees over the years. As with other forms of social media I must admit to being more of a reader/scroller than a contributor on LinkedIn. I use it generally for keeping up with current events within current and past areas of work and within some companies that interest me. I am definitely more active on LinkedIn when looking for work & have, in the past, been contacted via LinkedIn about work opportunities, so it does do what it’s supposed it.

I found that when I was living in Australia more people I knew were on LinkedIn, I have many friends here (Scotland) who are like ‘Link what?’. From a quick Google it would seem the UK has around twice as many LinkedIn users than Australia but then again the UK has more than double the population of Australia so maybe I’m onto something after all 🙂 . LinkedIn definitely has benefits and I like the ability to quickly & easily update my CV/Resume via LinkedIn. I can see LinkedIn becoming more prevalent in future as we become more digital, however I think the benefits of using LinkedIn really depend on how many of those in your field also use the service & how much work you’re willing to put into being an active member of the LinkedIn community (something I need to work on!).

Getting close to the 23 Things finish line now, eeek! But first, I must learn about Altmetrics for Thing 19. As someone who doesn’t have much to do with the research side of things this was a very new topic for me & something I hadn’t even heard about before today. I imagine prior to digital data it would’ve been quite a laborious task collating information on a paper or journal’s impact. By using Altmetrics you can see quite easily how big an impact a certain paper has had. Although I’m sure the software has it’s shortcomings, after-all it did take me three attempts to find a paper with data (not sure if this just cause there wasn’t any?), but when I did I really liked the look of Altmetrics. I eventually settled for ‘Learning, Teaching, and Scholarship in a Digital Age‘ ( Christine Greenhow, Beth Robelia, Joan E. Hughes) found on Sage Journals.

The info-graphics that Altmetrics use are pleasing to the eye and easy to decipher, even showing demographics in detail which was interesting. I was surprised at how low the number was for the article I chose but I’m sure there are many out there with a much higher impact. I can imagine that Altmetrics would be a very exciting and useful tool for those who have had a paper or journal published, a little like Twitter Analytics for those of us who only publish words on a very mini scale 🙂 .

Okay, so I think I may be the only person left in the world who hasn’t played PokemonGo – shock, horror! I was never a fan of Pokemon in my younger years & if I’m honest I’m not really much of a fan of playing games (I know, that makes me sound like the most boring person ever

). I do know many people who were obsessed with PokemonGo when it first came out though & in my previous job it wasn’t unusual to have people barging into my office in the hunt for rare creatures! Needless to say, for thing 18 I didn’t choose PokemonGo as my focus. Instead I took a look at the Dulux Visualiser App, which will come in handy seeing as I’ve recently bought a house which is definitely a bit of fixer upper! On first use it wasn’t as seamless to use as it looked in the promo video, but maybe with more practice I’ll get the hang of it!

I also took a quick look at the article on VR in American Football and watched a video about Daqri AR Smart Glasses for workplaces and I can really see the benefits in both. The AR smart glasses in particular seemed very useful for communicating with people in any location & being able to show them exactly what you were looking at. I have used VR glasses briefly in the past & felt it was a little disorientating, but with both VR & AR technology becoming more & more common I’m sure it’ll be something I’ll get used to & will eventually be part of our everyday lives.

I’m no stranger to GPS, having the memory of a goldfish and virtually no sense of direction means I probably use GPS more than most. Road-trips used to be interesting to say the least – between my lack of direction &map reading skills & my husband’s inability to read while in motion (travel sickness 😦 ), it’s a miracle we made it anywhere – therefore, for me, the invention of decent GPS for driving was a god-send!

Geocaching, however, is not something I have done before. I had heard about it in a very vague sense but had no real clue what Geocaching involved. I looked into geocaching.com for Thing 17 & I have to say I didn’t love the website/app. There were many options only available on a ‘premium’ payed for basis which made things a little more difficult as a geocaching beginner. The website had a few videos but I didn’t find a lot of detailed information, most of the information I gathered was from the comments section. I did give geocaching a go though & found my first ever cache on my walk home from work yesterday evening – woohoo! Pictures below, I won’t give away the exact location though, I don’t want to spoil the fun 🙂 . I felt a little strange loitering around trying to find the cache & I also didn’t have a pen to add my name to the list, but it was fun none-the-less. Will I keep it up? I doubt it, but then again, stranger things have happened!